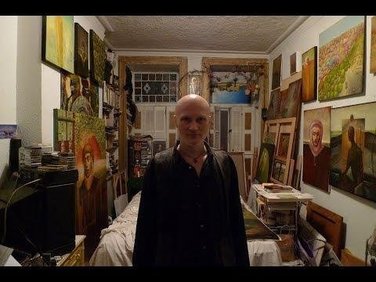 ​Hawk arrived to New York in 1995 and quickly garnered 19 group shows and 2 solo shows all within his first year. During this time, New Art International hailed Mr. Alfredson as "the darling of the New York underground art scene". As Hawk reflects on this time period he has this to say: "There wasn't a day in the mid-90's when my work wasn't up on some wall somewhere in New York City. The art scene was very concentrated, show opportunities flowed and even overlapped to the next. It was an incredible delirious and exciting time".

Besides exhibiting at exotic locales such as nightclubs and avant-garde fashion shows, Hawk has also exhibited his work at prestigious spaces including The Katonah Museum (in a group show curated by Thelma Golden of The Whitney Museum), Japan's Prefectoral Museum in Tokyo, New York's Alternative Museum, Australia's Regional Art Museum in Orange, NSW, and the historic Nordiska Museet in Stockholm, Sweden. Gallery exhibitions can be counted in the hundreds and include the destinations Los Angeles, San Francisco, Chicago, Boca Raton, Boston and Baltimore along with his ubiquitous showings throughout New York City.

While living in the renowned Hotel Chelsea from 2001-2010, thousands of international visitors had the opportunity to discover and enjoy Mr. Alfredson's work every year. During those nine years, prominently displayed in the hotel's lobby and also throughout ten floors of it's Victorian staircase were over 50 examples of Hawk's work. Visiting documentarians and photographers frequently sought out Hawk's elusive presence for interviews regarding his work and personal commentary on the energetic milleu of the hotel's artistic scene in which his dynamic oil paintings simultaneously influenced and thrived. 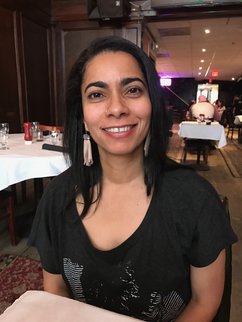 ​Of Caribbean decent but brought up in Brooklyn, NY, Stacy Mohammed started her art education at Brooklyn College under the tutelage of Lennart Anderson, who she studied with for five years. Her education continued at the New York Studio School and then at Boston University, where she received an MFA in painting.

She has attended residencies in Vermont, the Dominican Republic and most recently the Skowhegan School of Painting and Sculpture in Skowhegan, ME. She is currently the artist in residency at the Henry Luce III foundation for arts and religion in D.C. 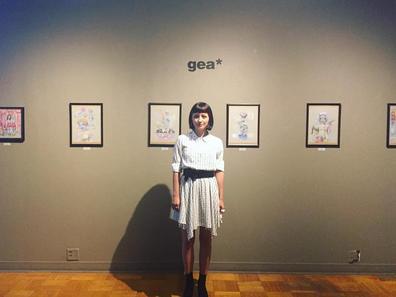 ​
gea* is a Chilean-born multidisciplinary self taught artist based in New York. Often focusing on disturbing and explicit subjects, her drawings juxtapose sweetness and repulsion presented in a dream like pop surrealism through which she explores the nether regions of our collective psyche. 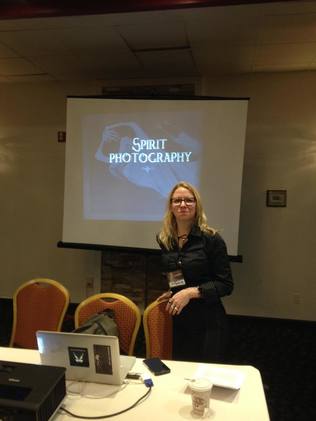 ​J.R. Pepper is a photographer, artist and researcher who specializes in Victorian spirit photography and Japanese popular culture. Her work featured on a variety of websites, album covers, galleries, press releases and publications, including Haunted America:FAQ by Dave Thompson. She has done lectures and panels at various conventions including New York Anime Festival, New York Comic Con, Tokyo in Tulsa, The Steampunk World's Faire, Catland Books and with the Morbid Anatomy Museum. Her artwork has been featured on various websites including VICE.com and has exhibited in numerous group shows throughout the global, including the sold-out Nasty Women Art Show. She lives in New York and works as an archivist in a retouching studio and an assistant at The Burns Archive. 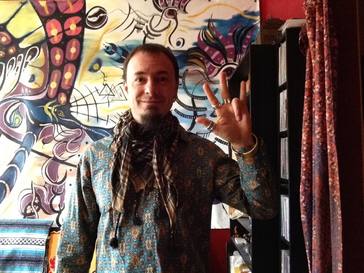 Robert L. Pepper , is an artist/musician, residing in Brooklyn NY. He received a B.A. in Fine Arts from Brooklyn College. His works include oil, and acrylic paintings, films, and experimental music recordings. His work is abstract in nature while using various symbols and occult references. His portraits are a breakdown of the subject’s personality into abstract designs and esoteric symbols. 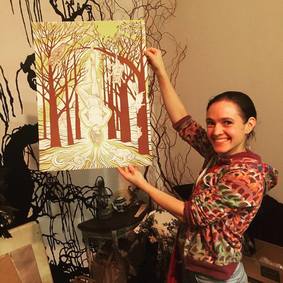 ​Kyla Quigley is an artist and yoga teacher currently living in the woods of midcoast Maine. She has been working primarily in clay and for the last year and a half, on a series of candle holders representing the major arcana of the tarot. Kyla sells a line of sculpted ceremonial pipes through her shop, Magick Deery Studios. She is also working on designing her own tarot deck. 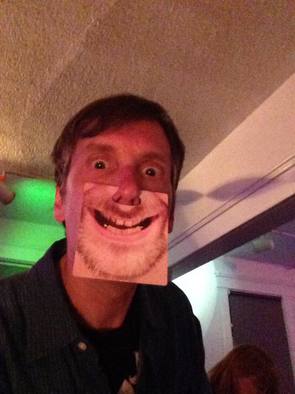 Jim Tuite has created since the early 80s. His photographs share a world somewhere between the macroscopic and the microscopic. In so doing, his work attempts to become transcendent and timeless. Some of his photographic pieces are in dialogue with his creations as a video artist and a VJ. These disciplines stem from a common interest in breaking emotional and spiritual boundaries while investigating new visual possibilities. 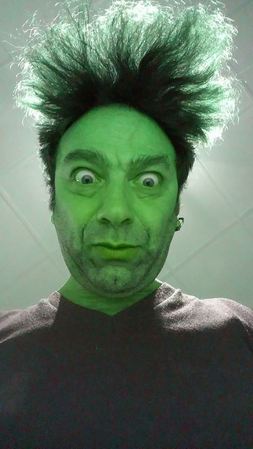 Multidisciplinary Artist born May 20th 1961 to an immigrant Russian family and educated in Brazil. Although most commonly known in the New York scene as a musician, Damien Olsen is also an accomplished visual artist who started selling drawings and paintings at a very young age and later on developed professionally as a sculptor and photographer. In the middle 70s, while being a student of Psychology he worked as a photographer assistant and advertising designer. After a few years of college he dropped Psychology school to pursue a career in contemporary dance that lasted for near 12 years. At the time studied Zen and Taoism at a Zen Center commanded by Robert Aitken Roshi.
Damien Olsen developed through over 4 decades of permanent activity a consistent and vast body of work that features paintings, artist books, collected objects, assemblages, photographs and sculptures. His series of shelves or cabinets of curiosities for instance resemble geological/anthropological samples with no precisely subtle symbolic allusions to Philosophy, Sexuality, Psychology, Paleontology and Architecture. 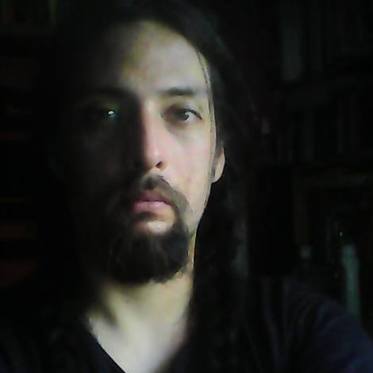 ​Leonardo A. Casas-Garcia was born in Santiago de Chile back in the mid-70s. Exposed to daily doses of Television, comic-books and film mags supplied by his parents, Leonardo develop a taste and eye for the fringes of pop culture. In the 1990s, went to the art-school and creating different art-collectives as well as solo-projects. His most infamous art-shows includes Muzak, R.e.n.e and In Love there's no wrong. Between 2006 and 2016 he dictated de Political Latin american Art at the Political Sciences School of the University of Chile Currently he is publishing monthly the Estrellita Mía fanzine, an international platform for art, popular music and pop-obsessions. 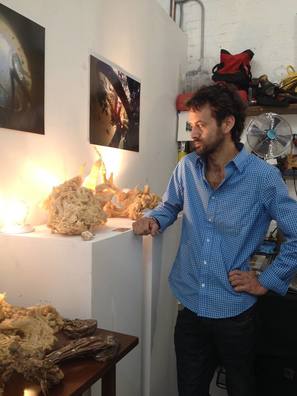 ​David Irving Weiner is an interdisciplinary artist living and working in Brooklyn, NY. Conceptually driven, current themes of his artistic practice include recording movement, bodies in motion, energy impressions, and material transformations. Learning to function as a catalyst within set reactions of elemental forces, accelerating the developmental processes of time, David internalizes the role of alchemical mediator in his artistic practice.
Driven to make large scale sculpture in real time, David creates in an aquatic environment. This alternative workspace reduces the confines of both gravity and friction. Submerging himself completely in a vessel of cold water, David pressure-injects wax from above and below. The interaction reconfigures the lattice structure of the molten wax as it spreads and solidifies. These event-based sculptures examine the dynamics of closeness, proximity, and fluidity between artist, materials, and surroundings. 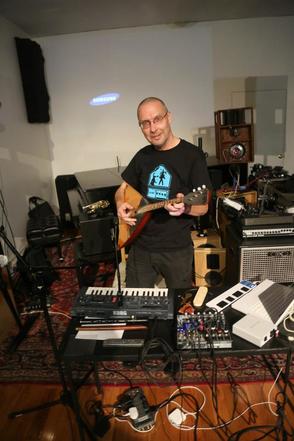 "As a visual artist I have long had a great interest in ancient symbols glyphs and runes as I grew up in an area of the UK where these were prevalent and readily visible in pre-historical monuments and ancient architecture.
This joint project with Robert Pepper was conducted with an initial exchange of a number of photographs of where we lived. These photographs were then manipulated and combined in a series of collaged images. These collages formed the basis of the paintings which ensued.
The images are reduced to imaginary symbols and glyphs and organized in an imaginary pictographic manner. Each painting is both individual and part of a wider narrative.
They invite the viewer to their own interpretation."
​
http://www.rapoon.org/